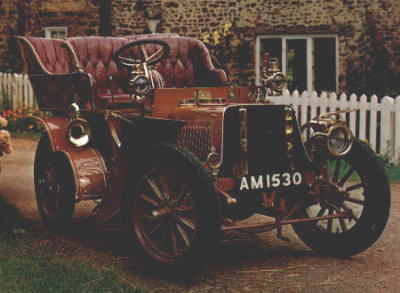 The 12/16 was based on a French Berliet design. Initially the cars were of high French content and over time more and more components were made by Sunbeam.

It used a four cylinder engine of 2412cc and three speed gearbox. The exhaust valves were camshaft operated, but the inlet valves relied on vacuum in the combustion chamber. It had a wooden chassis with an underframe for the engine.

In time the 12hp was fitted with the oil-bath chain case for which Sunbeam bicycles were famous. The oil bath enclosed the chain drive, providing lubrication and quieter running.

In May 1903, two of these cars competed in the Glasgow to London non-stop trials. Both cars made the run non-stop with four passengers on board and earned full points.

A new T-head engine of 2660cc with variable inlet valve lift appeared for 1905. The variable lift system operated via a sliding camshaft. (A T-head has inlet valves on one side of the head and exhaust valves on the other side, operated by separate camshafts.) The car thus became the 12/14.