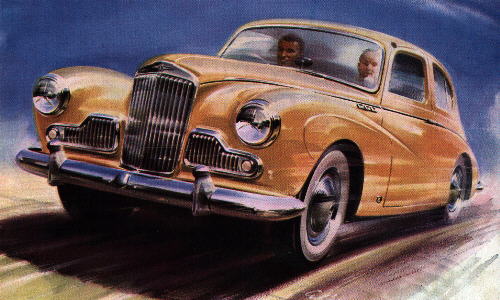 Saloon and drophead coupe body styles were available. The saloon shells were made by British Light Steel Pressings, while the coupe was finished and trimmed by Thrupp & Maberly.

The Mk II 90 received a new chassis and independent front suspension. The engine was increased in size to 2267cc. This increased the power output to 70bhp @ 4000rpm.

Externally, the Mk II was recognizable by two air intake grilles flanking the radiator, in place of lamps on the Mk I. The mudguards were also raised to comply with American lighting regulations. 5493 Mk IIs were built.

The Mk IIA of 1952 is best recognized by the deletion of the rear wheel spats. It also received improved brakes and more power, up to 77bhp @ 4100rpm.

1954 saw the introduction of the Sunbeam Mk III, the “Talbot” name being dropped. It received the Alpine specification 80bhp engine, larger intake grilles and portholes in the side of the mudguards. Production ceased in 1957.

Some of the earlier Mk I and II cars were also badged as Sunbeams rather than Sunbeam-Talbots in certain markets.

The 90 proved to be a successful competition car with drivers such as Stirling Moss at the wheel. The highlight of its competition career must be the winning of the 1955 Monte Carlo Rally outright.