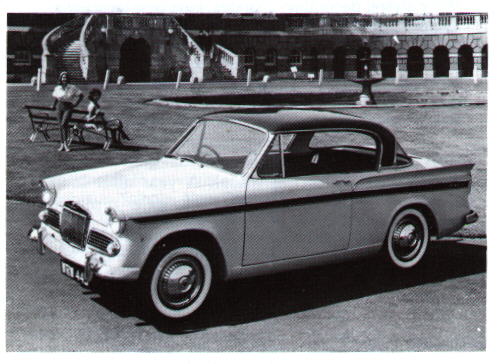 The Sunbeam Rapier, the first variant of Rootes’ “Audax” range to be released, was introduced in 1955. It was a smart 2 door styled by the Raymond Loewy studios. Four door Audax variants appeared in 1956 as the Hillman Minx and Singer Gazelle.

Rapier shells were made by Pressed Steel in Cowley. The shell was then shipped to Thrupp & Maberly in Cricklewood for painting and trimming. From there the shell was moved to the Rootes plant at Ryton for final assembly.

The Series I Rapier featured the 1390cc overhead valve Rootes engine first seen in the 1954 Minx. It featured independent front suspension via coil springs and wishbones, with a live rear axle via leaf springs. Initially a single downdraft Stromberg carburettor was used, changing to twin downdraft Zeniths part way through production. 7,477 Series I models were built.

For 1958, the Rapier was restyled with bigger tail fins and a traditional Talbot grille. The Series II’s engine was bored out to 1494cc. A convertible model was introduced. Series II Production ran to 15,151 cars.

1959 saw the introduction of the Series III Rapier. The Series III received front disc brakes in place of the all drum system on the Series I and II. The interior featured a new wooden dashboard. 15,368 examples were built.

Cosmetically, the 1963 Series IV introduced a new grille and front sheetmetal. The convertible was dropped from the range. The road wheels were reduced in size from 15 inches to 13 inches. Production totalled 9,700 units.

The final iteration of the Rapier appeared in 1965. It featured the new 1725cc five bearing version of the old engine. 3,759 were built before production ended in 1967.

The Rapier had an illustrious career in competition. It finished first and second in the 1600cc special touring class in it’s competition debut in the 1956 Mille Miglia. In 1958 Peter Harper won the RAC Rally in a Rapier. Some other significant results include:

One thought on “Sunbeam Rapier”