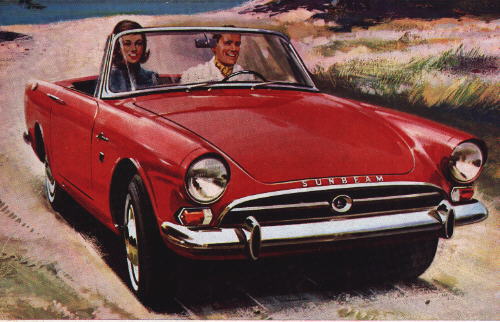 The third generation Alpine was launched in 1959. Styled by Kenneth Howes, it was based on the contemporary Hillman Minx. It used the floorpan of the Hillman Husky, a short wheelbase Minx estate car.

As launched, it used Rootes’ 1494cc engine to Sunbeam Rapier specification. Initially all Alpines were built by Armstrong Siddeley. 11,904 Series I cars were made.

1963’s Series III model gained a new interior and a roomier boot. Two specifications were introduced: Sports and GT. The GT came with a hardtop as standard equipment, but no folding hood. The lack of a hood resulted in a roomier interior and the engine was detuned for greater comfort. The Sports meanwhile had a hood, while the hardtop was optional. It also retained the sportier engine. Production totalled 5,863 units.

For 1964, the Series IV saw the tailfins cut back. It received a new grille and optional automatic gearbox. 12,406 were built.

The coachbuilder Harrington also produced a number of coupe versions of the Alpine which were supported by the factory and sold through their dealer network.

A register is being compiled of surviving Alpines. At www.sunbeamalpine.org you can see a list of known survivors and add your own car’s details.