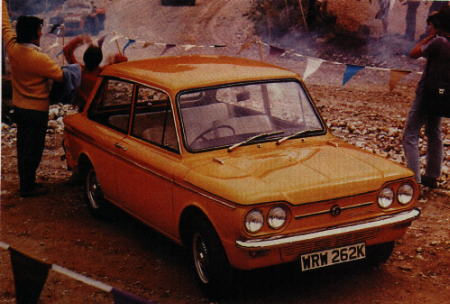 When Rootes launched the Hillman Imp in 1963, the Coventry-Climax derived engine was a dream come true for tuning specialists. It made sense for Rootes to build their own performance version to tackle the Mini-Cooper. The result was the Sunbeam Imp Sport, launched in 1966. Externally it was identifiable by different badging, chrome trim and a slatted engine cover. Inside there was a full length dashboard, carpet, extra gauges and better trim. The most important difference, however, was in the engine bay.

Twin side-draught Strombergs replaced the single Solex. There was a higher lift camshaft, bigger valves and improved cylinder head design. An oil cooler was fitted as standard equipment as were extractors. The brakes were improved by fitting a servo. The radiator was of a larger capacity and many components were strengthened to handle the increase in power output from 42bhp @ 4000rpm to 55bhp @ 6100rpm.

It may not sound much, but in a lightweight car with amazing handling abilities, the result could put a grin on the face of any driver.

In 1967, the Stiletto (Stiletto – little Rapier – get it?) was launched. It mated the Hillman Imp Californian coupe bodyshell to the Imp Sport engine a had a unique interior treatment, making it the most desirable Imp derivative.

In October 1968, the entire Imp range was upgraded to Mk III specification. This meant an all new dashboard (not for the Stiletto) and interior trim.

In 1970, Chrysler decided to axe the Singer name. Singer, too, had a performance Imp, called the Chamois Sport. The best features of the two models were combined and the new car was called simply “Sunbeam Sport”. The Sunbeam Sport is identifiable by its quad headlight arrangement, a la Stiletto, while Sunbeam Imp Sports have the regular Hillman Imp headlight arrangement.

The Stiletto died in 1972, while the Sport lasted until 1976 when the Imp was killed off. Approximately 10,000 each of the Stiletto and Imp Sport/Sport were built.

The Sunbeam name was also used on some export versions of the bread-and-butter Hillman, Singer and Commer Imp variants.