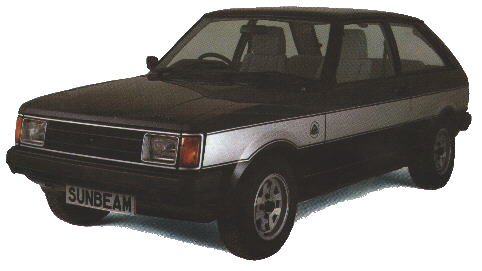 In 1976, Chrysler UK received assistance from the British Government to develop a new small car ro replace the Imp. To minimize costs, project 424 was to use the Hillman Avenger as its base. The result, launched in 1977, was a front-engined, rear wheel drive hatchback. It was nearer to the Avenger than the Imp in size, but retained some Imp features and styling cues. Initially three engines were available: a 930cc Imp unit and 1300 and 1600 Avenger units.

Chrysler decided to revive the Sunbeam name, dormant since 1976, for the new model. Unfortunately this was not in keeping with Chrysler’s policy of phasing out the old Rootes names. Consequently it was launched as the “Chrysler Sunbeam”.

Famous Sunbeams from the past were dusted off to publicize the new model. It’s a shame that this new Sunbeam was not quite as exciting as some of its illustrious forebears.

Chrysler, in deep financial trouble, sold its European divisions to Peugeot in 1978. Peugeot needed a new name for their fresh acquisition. Rummaging through the cupboard, they found the Talbot name, unused since the last Lago in 1959. Talbot was substituted for Chrysler, and the car became the Talbot Sunbeam. This was rather ironic because Roesch Talbot and Coatalen Sunbeam fans were none too pleased when the Sunbeam-Talbot marque was created in 1938.

In 1979, two new Talbot Sunbeams arrived which did live up to their name. The first, the 1600 Ti used the Avenger Tiger engine giving excellent performance. The Ti bragged about it too, with wings and go faster stripes everywhere. The second one was much more subtle and was modified to take a 2.2 litre Lotus engine. The Sunbeam Lotus was fast. Neck-snappingly fast. 60mph could be reached from standstill in 6.6 seconds in standard form. In 1979, this was Ferrari and Porsche territory. The Group 2 rally specification model, meanwhile, could hit 60mph in 5 seconds. These figures were unheard of from a hot hatch then and are still very respectable today.

The Sunbeam Lotus won the World Rally Championship in 1981 but sadly its life was cut short. Rally success was not sufficient to shift the rapidly aging mass market Talbots. The Linwood plant closed down that year, ending Sunbeam and Avenger production.

In some markets these cars were called Talbot Simca Sunbeams.

One thought on “Chrysler/Talbot Sunbeam 424”