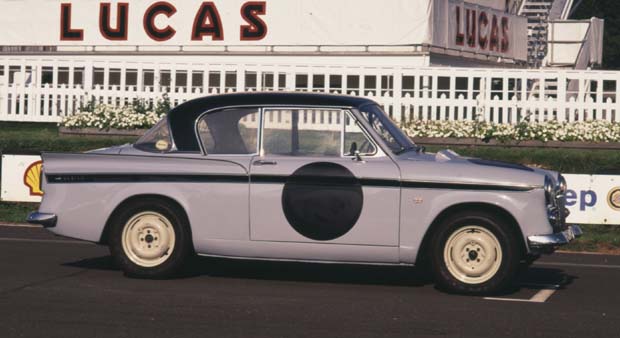 The Rapier began life as a left-hand drive Series 3 in Powder Blue and Corinth Blue. This car and another identical car were modified in 1960 by the Rootes Group Competitions Department for racing in the USA. They were converted to right-hand drive (?), stripped, lightened using aluminium panels and perspex windows, tuned and shipped to the USA.

The car was discovered in Ohio by a friend of mine in 1989, shipped back to the UK and restored. I have looked after it since it came back, and finally bought it last year. The picture shows the car on the grid at Goodwood race circuit and was taken just before the Revival Meeting last September. Unfortunately, We cannot trace the other car.

Another of the greats has passed. Former Rootes Competition Manager Marcus Chambers was 98.

Sad to report that Peter Jopp, who raced and rallied Sunbeams for the works team, passed away in August. He was 80.

Another obituary I’m afraid. This time Raymond Baxter, who was part of the Rootes works rally team and narrated many Rootes promotional films, has passed on:

With great sadness I must report that works rally driver Colin Malkin has passed away.

One for Sheila Van Damm fans – there’s a new film out soon called Mrs Henderson Presents. It is about the Windmill theatre with which the Van Damm family was associated. Bob Hoskins plays Sheila’s father.

No word yet on whether Sheila appears as a character in the film. I doubt there will be any Sunbeam content although one can always hope.

(For the uninitiated, Sheila Van Damm was one of Sunbeam’s greatest works rally drivers.)